Ever since I started using the awesome pudb debugger for Python programs I've been curious about the urwid library, an user interface library for console-based applications that the debugger uses. The examples in the gallery are just gorgeous!

So last week I decided I would write a console-based game and learn Urwid in the process. I decided to implement a Solitaire clone (specifically, the Klondike form). I thought it would be fun to draw the cards using the box-drawing characters and card symbols available in Unicode.

Here is a screenshot of the final game: 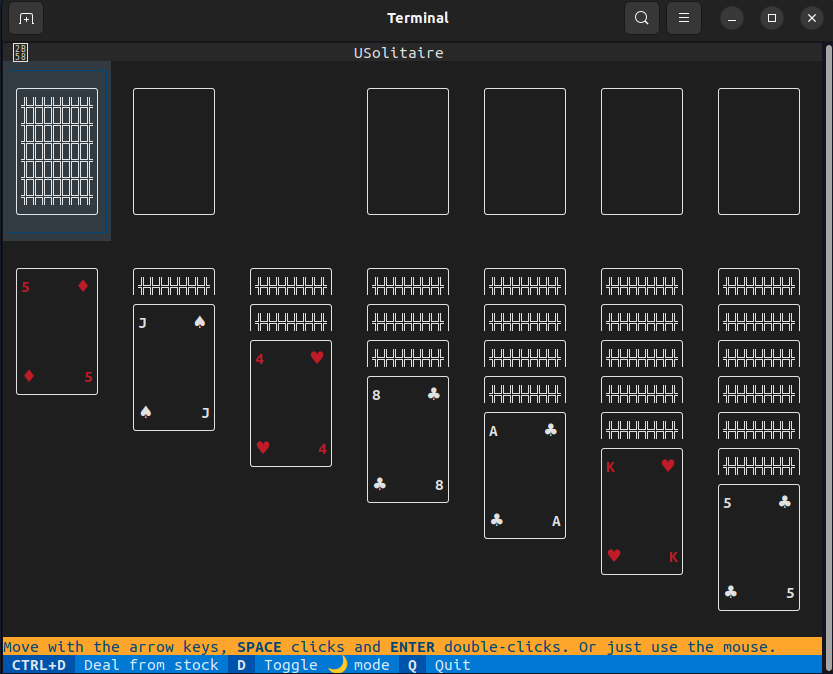 Before starting to code, I explored the library a bit in the shell, following the examples from the tutorial. I also did some planning, working out how to draw the game elements so that it would fit a 40x80 characters terminal window.

Then it was time to start coding, I started by trying to write something that I could put in the screen, a custom widget to represent a card.

After reading about widget layouts and sizings, I thought I wanted a fixed size widget, but my attempts to write one were hard to use, I kept running into errors that happen when you try to use a fixed widget with things that expect something else.

I was finally able to do it after reading more carefully the documentation about custom widgets and figured it was easier to use the urwid.WidgetWrap class around a urwid.Text widget drawing the card using line-breaks to break the content.

I kept running into those errors related to the sizing mode later on, so I had to become a bit more acquainted with the widgets I was using to know if they were box-sizing or flow-sizing mode. I wonder if there is an easier way of dealing with those.

I'm really liking to play with this library, I think I'll try more stuff with it soon.

If you want to play the game, you can install it with:

The source code is on Github.