Some days ago I read this nice article talking about co-routines as an alternative to state machines.

The most popular use case for co-routines in Python has been asynchronous I/O, and there are a bunch of Python things that use them (like Twisted, Tornado and the standard library module asyncio which appeared in Python 3.4).

Apart from the async stuff, I find quite hard to think up use cases for co-routines, they mostly look like complicated stuff that smart people have a lot of trouble to make it useful.

So I was curious about this idea of using co-routines as alternative for state machines, because state machines are kind of everywhere, even if not always explicitly.

I've seen a few other examples that kinda made sense, like David's scheduler for cooperative tasks, and a discrete event simulation in the book Fluent Python by Luciano Ramalho, but these still seem a bit far away for me.

So I decided to test out for myself reimplementing some simple state machine as a co-routine and see how it goes.

Are co-routines an alternative to state machines?

To try out the idea, I decided to write a small program using a state machine, and then write a co-routine version of it. I decided to implement a naive program to strip out C-style comments.

I must say that this is not production code, it ignores the case of comments inside of a string (as in '/**/' for the sake of simplicity). I only wrote this to explore the idea of alternatives to state machines.

Here is a diagram of the state machine: 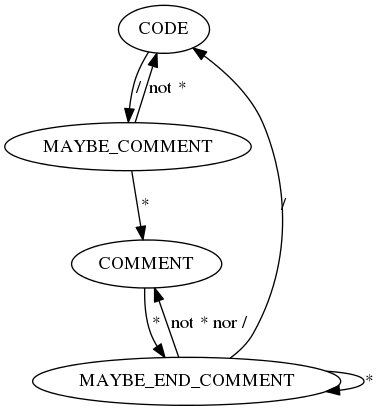 Here is the state machine implementation.

It was fairly straightforward to implement, but the code ends up a bit verbose.

Next, I went on and wrote the co-routine version, and didn't really like the result. First of all, I find a bit cumbersome having to write the sink and build the driving code, I thought: "why can't I just use the function? what if I want to do something else than just print, do I have to write a sink-like code every time?"

After mulling for a bit, I realized that the most important gain from the co-routine code was being able to "pause execution", so I figured I could write a generator function that would consume the input lazily. While attempting to do that, I realized I don't even need it to be a generator, it can be just a regular function that will consume the input lazily and return the full results.

And that's what I did, and decided that I like this code more than the co-routine version. I think it allows you to skip thinking about the explicit states when writing the code, it's lazy and it's easy to use (just a regular function).

I'm not sure if it's better than the state machine version, though, because I think to read it and understand you sort of have to build a mental model of the states in your head. So it seems easier to write, but may be tougher to read. I think for state machines with high number of states this would not be good for maintainability, and you'd probably want have a diagram.

Conclusions, or, how I feel about this

State machines are complicated, but they're very useful. Even if it takes some effort to understand them, I feel it's still less effort than co-routines.

Co-routines are also complicated, I find they demand too much cognition to work with and can be harder to debug than regular state machine code.

Combining lazy evaluation and Python functions probably work better as an alternative of state machines than co-routines, because they give you the benefits without most of the drawbacks.

I'm not sure if they're as much powerful nor I'm convinced that the code is more maintainable, but for some state machines it may be very expressive.