I remember the first time I submitted a pull request in GitHub and some reviewer asked me to squash the commits. I had no idea what they were talking about. I didn't have any friends who knew Git, I was pretty much a noob on Git and GitHub. It's easy to forget how scary this stuff can be for someone just starting out with their first open source contribution.

It took me several weeks to figure out the whole thing because I was so afraid of messing up. And in the end the code didn't even get merged.

I never forgot my frustration during this, which is why today I avoid as much as possible to ask for someone to rebase their code in a pull request, unless I can pair with them and show how to do it.

Well, nowadays GitHub allows a maintainer to squash commits when merging, which is pretty cool. However, this isn't a task that's particularly hard to do. When you have someone else to show you how, you pick it up real fast. It's just a bit scary when you're on your own.

I've found there are many little things like this with Git. Git is a fine tool for collaborating on software development and many open source developers would find hard to use any other thing.

However, there is all this learning curve you must go through until you're finally actually productive with it. When you're just starting to use it, this XKCD comic is very real:

You want to get stuff done, you don't want to be spending cognition on your version control tool. With Git, it takes a little while to get to a point where you don't need to think much about it, at least when you're collaborating on a project with many different people, as is the case in many open source projects.

I want to share with you a couple things I learned in order to get productive with Git, in the hopes that it will ease your own learning curve and get you productive quicker. This won't be a Git tutorial, it's more like a booster of your own Git learning. These are things that helped me to learn and use Git better. If you want a tutorial, this is a cool one.

I'm far from a Git expert, most of what I learned was while trying to get stuff done, usually after googling for "how to do X in Git". I have trouble understanding Git's help because it seems to be written for people that know Git internals, using all this unfamiliar vocabulary. But I can get stuff done, and you can too.

There is always a way to undo

The fact that this isn't obvious and that undoing things in Git aren't always straightforward, is one of the biggest reasons for the fear of messing up. So, let's get rid of those fears first.

Almost always, there is a way to undo whatever you've done. This is true even when you've used one of the power tools (git rebase) that rewrites the commit history. As long as you haven't deleted your local repo, you can always get back to a previous state.

If you've committed and then realized that you didn't mean to, don't worry, you can undo it with the following command:

This will undo the last commit, but will keep your files intact so you won't lose any work.

Now, if you've just tried running that and it didn't work it's because I've lied to you -- sorry! That command doesn't exist by default in Git, but it should! In order to add it, run the following command:

This adds an alias, which is essentially a shortcut to another command. Git aliases are very helpful, because that's how you tweak Git's complicated command line interface to something that's actually usable. Aliases (and Git's global configuration for your user) are stored in a .gitconfig file in your user directory, which you can edit using your editor if you like.

In fact, you can even add an alias to add new aliases more easily, but this may be getting out of hand... Anyway, later on, we'll see also how to use Bash aliases and functions to further improve the workflow.

You can check my personal gitconfig (which contains the stuff I share here and more) if you're already familiar with this stuff and came here only for the Git aliases.

You can use any other alias name that you prefer instead of undo-commit there. Personally, I use just undo for this one.

Undo adding a file to commit

If you've added a file with git add that you didn't mean to, you can undo it with:

Again, this is only after you've added the proper alias with the following command:

Undo a rebase that went wrong

If you've tried doing a rebase or some other command that rewrote the commit history and you want to undo it, you can use something called the reference log (or, reflog). Try running git reflog in a Git repository, you'll see something like this:

This is a log of every state of your files that is stored, which includes when you commit changes, checkout branches, do rebases (with separate states for every step of the rebase), merges and etc.

You can get back to any of those states, using the command below, replacing REFLOG_ENTRY by the HEAD@{index} from the reflog for the state you want to go back:

Note that those numbers are counting backwards, they change every time you make a change in the repo. You want to always run git reflog before going back, to be sure you'll use the up-to-date reference.

Also, note that these logs are only stored locally, you'll lose them if you delete your local repo.

Alright, we're done covering undoing stuff. I hope now that you know how to undo, you will feel more comfortable trying more stuff without the fear of breaking things. The next tips will be a bit more random.

Your brain can parse this: 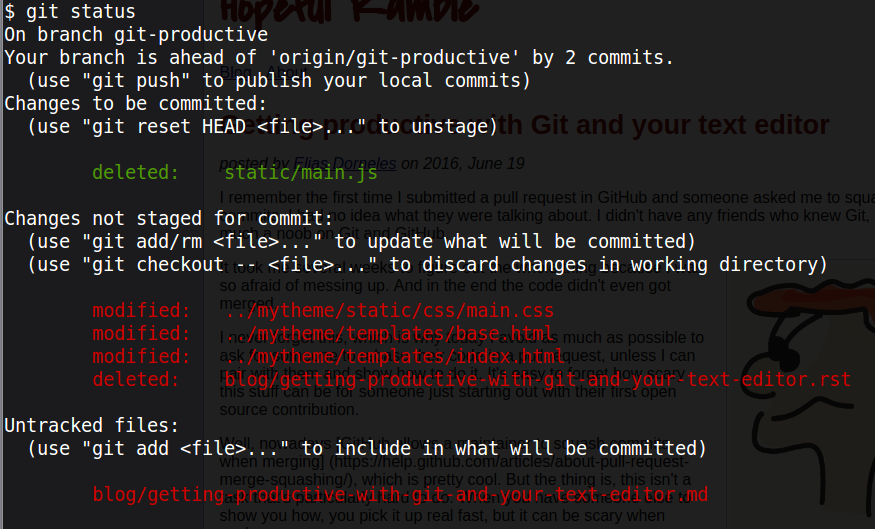 Much easier than this: 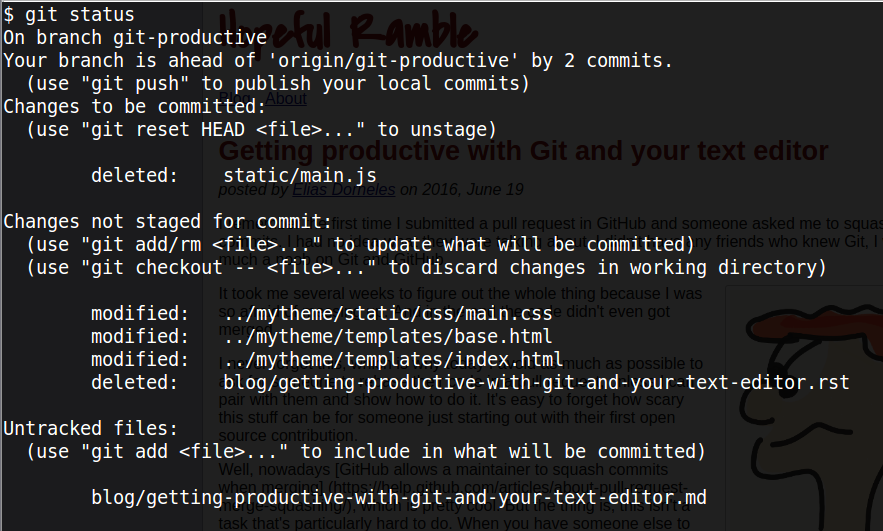 In case your Git output isn't showing colored output, configure it to do so:

Also, if you end up needing to do this, consider upgrading Git, this has been the default for some time, together with many other nice usability improvements.

I usually use short aliases to either git add --update or git add --all.

Add only files that were edited, ignore new ones

When you want to commit all files that you have edited, ignoring any new files that may now be inside the repo directory, do:

This is a shortcut to git add --update, which is the equivalent of doing a git add on every modified file that were previously committed.

It can also take a directory, you can ask Git to add only files that were edited inside a directory:

Git expects you to tell it when you rename or delete files. You can ask Git to add all changes to be committed, including adding, deleting and renaming files, using the command:

You can also give it a directory, so that Git only does this for the stuff under it:

I use this so often that it deserved an alias:

Solve conflicts only once

When you're merging or rebasing often, some conflicts keep reappearing, specially when you're working temporarily on a branch. Instead of solving them again manually every time, ask Git to do it automatically, by enabling rerere:

The name rerere stands for "reuse recorded resolution", and that's exactly what it does: it will record how you solved previous conflicts and next time it finds the same conflict it will just apply your previous fix. This way, you won't need to keep solving the same conflicts again and again and save a few brain cycles.

Opening files in your editor

I edit code in Vim.

But even if you don't, you might find useful these Bash functions and aliases (taken from my ~/.bashrc file) and tweak them to your needs:

I came up with these functions when I realized how often I wanted to do open the editor and load one of these set of files:

This may or may not be useful to you, depending on how you use your editor. In my case, I open and close vim often, sometimes in different terminals, so this has been quite handy.

Fetching code from a pull request (GitHub only)

Update: A friend has pointed out that another option is to add a configuration to have the PRs fetched automatically.

If you maintain open source projects, you may like this one.

When you want to check out locally the changes introduced by a pull request, in vanilla Git it's a bit of work (you have to add a new remote, fetch from it and then checkout the branch). GitHub allows you to skip adding a new remote, you can fetch the code from a pull request into a new branch with only one command:

If you're like me, you'll be lazy to type (and memorize) all that too, so here is an alias for doing that, paste it under the [alias] section in your ~/.gitconfig:

This alias is using a shell function to parameterize it. If you run git fetch-pr it will show the help:

Using this, to fetch the code from pull request #1234, you can do simply:

This will create a branch called pr-1234 with the checked-out code. If you want to name the branch, just provide yet another parameter:

git stash is an useful command to know: it sets aside your current changes, so you can work in other stuff. Use git stash pop to get back the changes. This is handy to switch to a different task, without having to copy files or lose your current uncommitted progress.

I've also found useful to know how to use diffs & patches, including the diff tools git diff & git apply and also the patch command-line tool. These are helpful a few times, when you have to replay your work in another repository.

If you like to do atomic commits (i.e., making each commit introduces a small self-contained change), you will like the git add -p command. It starts an interactive session, asking for each piece of the diff if you want to include in the next commit or not.

You will also like the git diff --cached command, which shows the diff for the stuff added to the index, i.e., the changes you're about to commit.

One tool that I've been meaning to learn is tig, a console interface for Git. It has some nice features, like you can do tig grep to search files and then hit e on top of a search result to open the file in your editor in that exact place. I haven't adopted this tool fully in my workflow, though, I'm still evaluating.

There is also this thing called Legit, a set of extensions (used via aliases) created by Kenneth Reitz (from Python Requests and httpbin fame) which looks interesting. I have only recently started experimenting with it, so I can't comment much. I know that Git deserves something like it. If you use it, let me know how you like it.

Finally, you may also like this StackOverflow thread with Git questions and answers.

That's all I had for now, folks!