Those who know me well, know that I'm a bit of a Steve Yegge fanboy. That's true, I love reading Steve's mean jokes and I keep coming back to those long blog posts. That dude's writing has been a great influence to me. I've even started to write long posts myself, in a sort of cargo-cult-steve-yegge-wannabe behavior. I'm such a fanboy. Steve would probably feel embarrassed for me.

Anyway, I discovered a while ago that he has quietly released a book called A Programmer's Rantings: On Programming-Language Religions, Code Philosophies, Google Work Culture and Other Stuff, which is a collection of some of his articles put together with a few notes adding a bit more context to each article. It was published by HyperInk, which seems to be a cool company. I bought the ebook from their website and it offered me to send as a gift to a few friends, so it was a nice deal. 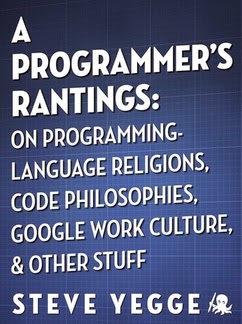 And the book is quite a journey. You get to read some of the first essays Steve wrote when he was pretty unknown (just another bright young fellow at Amazon) and also his latest rants posted on Google Plus, including the one he made public accidentally and it ended up making him kind of famous outside of the programming circles too.

I enjoyed reading this book a lot, although I suppose it would be expected for me say that, what with me being a fanboy and all. That being said, it's a quick read and lot's of fun -- highly recommended! Although it amounts to more than two hundred pages it still does not make half of the stuff on his blogs. So, if you like the book, you'll probably want to check out the blogs. Or vice-versa, whatever.