I cleaned up my desk this weekend and ended up finding some notes I wrote down some time ago when I attended a course about monitoring JBoss application servers. I haven't been doing much related to Java Web development lately, but I'm going to try to make a quick summary here because: 1) then I can safely throw away the paper with the notes, and 2) I think some of the tips can still be useful in the context of many long running JVM processes.

So, the most important thing to monitor in a long running JVM is arguably the garbage collection stats. When some JVM is misbehaving, the first thing you want to check is how much of the heap is being used and how often the full GC is being called.

One quick tip to reduce GC load is to set the initial heap size to the same amount of the maximum heap size, namely, you should use the same value for the -Xms and -Xmx JVM options. When you do this the JVM will allocate the maximum space it will ever use, right from the the start. This way you avoid memory reallocation for the heap and some GC calls, and can even sometimes speedup the startup of an application, it is usually the first thing I do when I install a Java desktop app like Eclipse or Intellij IDEA.

There are some nice articles about garbage collection in Java available, it's a fairly big topic and I don't know much beyond the basics to survive. You definitely want to know that full GC stops are bad and, although you can't avoid them completely, you want to keep them to a minimum so your application won't keep slogging.

Full GC stops happen when the area of memory reserved to objects that are "old" (namely, objects that have been around for most of the time and therefore are probably going to be around in the future) reaches its size limit. That means that whatever application code was running will be stopped and only the GC will execute for a moment, until some space is freed and your application code can execute again (or you'll be the misfortunate heir to anOutOfMemoryError).

As it happens, tuning the garbage collection is very specific to the type of application you're running. The JVM can use different garbage collection algorithms, and you may want to twiddle with them a little bit to see what works best. For your typical Java Web application, it's usually better to run several machines with moderate memory in a cluster than run all in one big machine with several GiB of memory due to how the GC works. However, your mileage may vary, so your best bet is to measure and monitor what's happening with the heap.

The number of threads vs backlog tradeoff

Now, in the case of Web applications, the second most important thing you want to watch is the busy threads count. Usually, it represents the number of requests being handled at a given moment. There is an useful tradeoff to be aware of that has to do with how these things happen inside the Web container, so bear with me for a little bit with the inaccurate description.

Whenever your application server (or whatever it is you're using to deploy your Java Web app) gets a new request, it tries to respond as soon as possible creating a new thread to handle it, right? Then, when the configured maximum number of threads is reached, all the new requests are kept on a queue (sometimes called backlog or acceptCount), waiting until one of the current busy threads finishes so that the server can then get the next request from the queue and use another thread to handle it.

Well, okay, it's not reaaally like that, I think what really happens is that each new request always goes to the backlog queue and there are some threads responsible for request processing that keep getting work from the backlog, but I thought it would be a bit easier to explain that way. 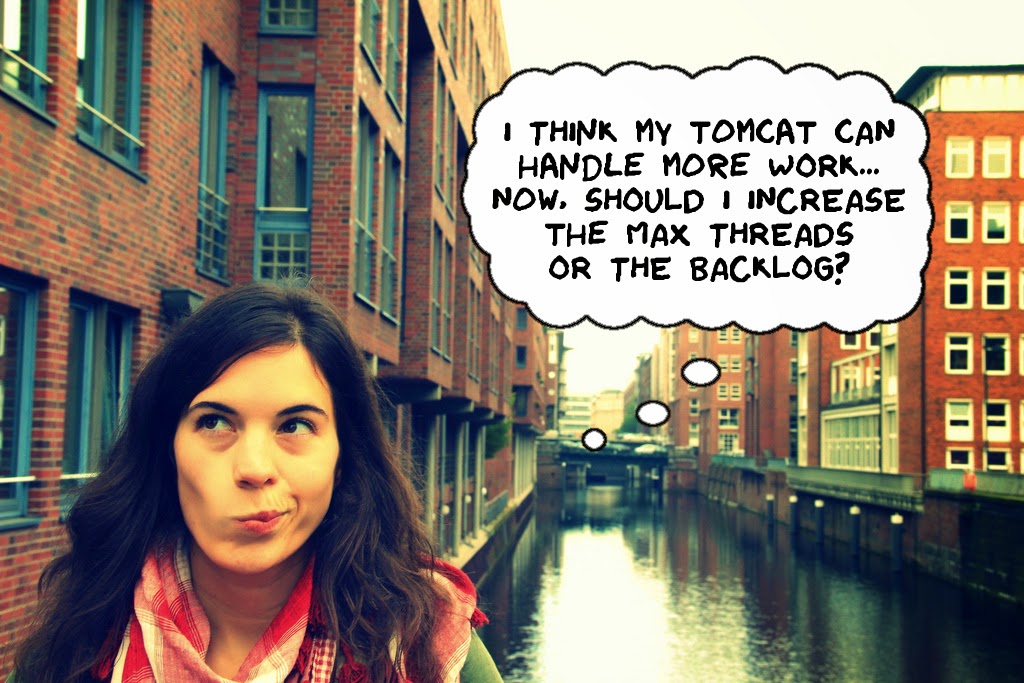 But here is the little secret: it's usually much easier for the operating system to manage queues than attend threads. So, often enough it's better to let the queue get big than to increase the maximum number of threads for your system to handle. Threads are often competing for resources, increasing its number may even hurt performance instead of improve it, specially when you have a peak load.

Of course the best thing to do will depend on the application you are serving and the load patterns in your server, so you need to measure it and experiment for a bit to figure out what numbers work best for you.

So, if there is any way to wrap-up all this, it would be: measure it, measure it, measure it! Different types of long-running JVM applications will have different effects on your system, so it's important to have data to make good decisions. Measuring the heap stats to see how the GC is doing and the number of busy threads to see the patterns in request handling (in the case of Web applications) is a good start.

Thanks for the review, José Ricardo and Valdir Stumm!